The Seed was planted many, many years ago by my Aunt Fran.  Aunt Fran, along with her husband, my Uncle Troy, had a part in building/remodeling several houses throughout the years. The first was a 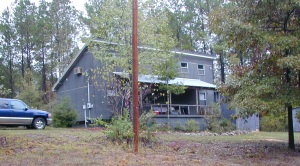 two-story addition to their canal home in Galveston County, Texas.  But it was their hunting cabin, nestled in the piney woods of Southwest Arkansas, that amazed me.  Its shed roof design was simple yet striking and the design elements inside were mesmerizing.  They designed it; they built it.  I wanted to do the same.  And so The Seed was planted.

The Seed eventually sprouted in the spring of 2010, some 25+ years later, and continues to grow and prosper to this day.  I call it the Little Lex House.

Daughters and PaPaw worked all day to hang sheathing on the N and W walls.
﻿

We nailed four 2’x4’s to rim joists to serves as stops to prevent the heavy walls from falling off the floor!

The S wall (on left) was our first.  We had to rebuild it twice!  My 19-year-old daughter soon realized that sitting on a skateboard saved her knees as she was nailing top plates. 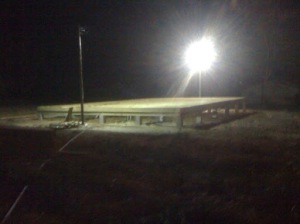 I took off work early to meet the cement truck in the afternoon.  Original calculation was 5 yards.  Was short one yard, but lucky to have a nice enough truck driver (out of Rockdale) to fetch another yard.  One stick of rebar was centered in each footing to extend up into piers (8’x8′ hollow cement blocks).  Enough play in the blocks to accommodate “eyeing” placement of the rebar at concrete pour. 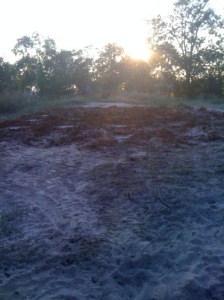